Architecture is the art of space made up of structural means.

The essence of architecture has the meaning of creativity with the artistic aspect of space itself with technological development for the leading of a comfortable and safe life. From the architect’s perspective, the space of architecture is a practical object, a three – dimensional perceptual object, and an existential object of self- awareness.

The transparent series seeks to capture the architectural features of three architects who use light as part of architecture into eyewear design.

The concave series is produced by two creative genius architects who are full of personality after being inspired by three-dimensional structures.

Frank Gehry is a creative architect. His work reflects the free-form sculpture and the deconstructivist movement in architecture.

He is one of the most famous architects in the United States, famous for his dramatic architectural style, using free lines and metal plates. His works include the American Center in Paris, the Guggenheim Bilbao Museum, the Louis Vuitton Museum, and the Walt Disney Concert Hall. The organic combination of the free square of ‘Frank Gehry’ was used as a key source of design.

Zaha Hadid was inspired by the image coming from her hometown of Iraq and designed metallic structures with concrete and steel.

Her most notable works include the Bitra Fire Station in Germany,

the Chinese Opera House, and Dongdaemun DDP in Seoul.

Her typical metallic curved structure was applied to the design of glasses.

Jean Nouvel, the architect of the light of France, has designed structures that change their appearance with the light and expressed the beauty of light and shadows casting on the glass.

Logistic and beautiful, Nouvel’s representative works include the Louvre Abu Dhabi, the Arab Cultural Center, and the Cartier Foundation.

Japan’s leading architect, Ando Tadao, is famous for his mysterious architecture that has brought nature into architecture including light, water, and projection and reflection. Bare concrete, which reveals its physical properties, has caused a great fashion trend in architecture. Fort Worth Museum of Contemporary Art, Naoshima Museum of Art, Omotesando Hills, and the Church of Light are his representative works.

‘’Ando’, inspired by the dome of the Naoshima Museum of Contemporary Art, ‘Ando’ is eyewear that uses a transparent sheet to bring light as part of the eyeglass design. 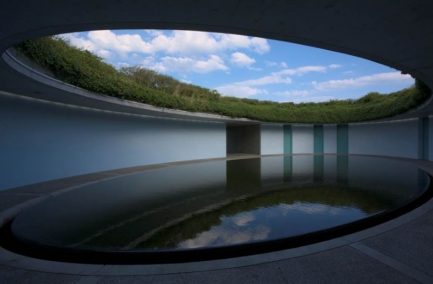 Louis Khan, the architect of silence and light, built space of inspiration and contemplation in the form of water reflecting light, skylights,

Salk Institute, the Kimbell Art Museum, and the Bangladesh Parliament House are some of his representative works.

Inspired by Salk Institute, square-shaped ‘Khan’ is a basic designed product but with a distinctive protruding part.